"We just have to find our rhythm and get some dirty goals." 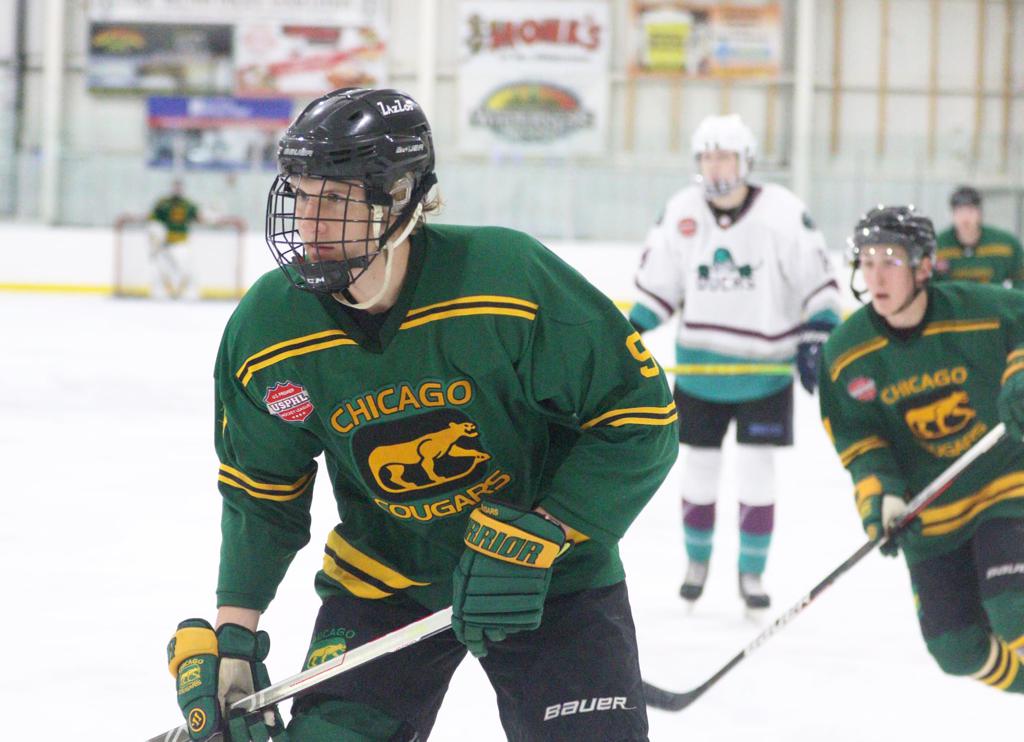 The Chicago Cougars opened the 2021-22 season with a series split in Baraboo, Wisconsin, against the Dells Ducks, dropping Friday night’s contest in overtime and then bouncing back with a decisive win on Saturday.

Second year Cougar Brenden Miranda opened the scoring on Friday night just three and a half minutes into the first frame, tipping a shot from Danny Determann behind Ducks goaltender Anthony Falzone. His tally was quickly followed by veteran Mike Sliwinski’s top-shelf snipe — but, ever the modest player, Sliwinski credits teammate Joe Gulino with doing the work to put the Cougars up 2-0.

“I made a quick pass to the point which got sent down to my linemate Joe Gulino, who really made the whole play happen. He fed me a great pass in the slot and all I had to do was pick a corner and put it past the team’s goalie,” said Sliwinski.

The Ducks would retaliate with two goals of their own before the first twenty minutes were in the books, making it a tie game.

“They capitalized on some silly mistakes that we made,” said Cougars head coach Josh Dallmann, reflecting on the two early third period goals by the Ducks that kept the game knotted at four apiece until the end of regulation.

The Ducks’ Bryce Jacobsen would put the final nail in the Cougars’ coffin in overtime, handing Chicago its first loss of the year by a score of 5-4.

“Every coach wants to win but to have some of those experiences — like losing a lead and [losing in] overtime — will be great learning experiences for our young team,” added Dallmann.

Game 2 of the series vs. the Dells Ducks: Saturday, Sept. 25

Saturday was all about the rookies as first year Cougars Gerdas Paulauskas and Cody Lourenco both got on the board. Paulauskas would score first, late in the opening frame, to give the Cougars a 1-0 lead into the first intermission.

Just like Friday night, Sliwinski capitalized after the first tally, this time in the second period. Ever the modest player, Sliwinski credits his linemate Joe Gulino with doing the work to put the Cougars up 2-0 on Saturday.

“I made a quick pass to the point which got sent down to my linemate Joe Gulino, who really made the whole play happen. He fed me a great pass in the slot and all I had to do was pick a corner and put it past the team’s goalie,” said Sliwinski.

Two Cougars then took two penalties, giving the Ducks ample opportunity to convert — and convert they did, with two powerplay goals in the second period to even the game at 2-2.

“We just have to get some more work on the PK,” said Dallmann of the squad’s special teams woes. “We got caught puck-watching and had bad details. [Guys] just need to buy into the PK and realize that if you’re on the penalty killing unit, that’s just as important as the powerplay guys.”

Luckily, that wasn’t the end of the night for the Cougars, as Paulauskas would tally his second goal of the evening to regain Chicago’s lead, an event Dallmann believes will be happening more often than not in the coming weeks.

“It was good to see him getting on the board on Saturday … He can create plays and putting him with some older guys that can help him along and compliment his game will be great for him and for the team. We are excited about what he brings to the table,” said Dallmann.

Newcomer Cody Lourenco would light the lamp one more time for his first tally as a member of the Chicago squad.

While Saturday’s win didn’t come easy, the team is proud of how they handled the initial loss and their resilience coming into the second half of the series.

“I think we had a great bounce back game and worked hard after the previous night’s loss, a loss that we all believed shouldn’t have happened,” said Sliwinski, reflecting on the weekend’s series. “We moved the puck really well in the offensive zone in both games, but definitely need to work on finishing more of our chances when we get them.”